Kudos to the Thomas Lovell Beddoes Society for making its journal, Doomsday, openly accessible using John Willinsky’s OJS software. There’s no content available yet, but I imagine it will be there soon, since I received my print copy of the latest issue a couple of weeks ago.

A YouTube member by the name of vidlad has been posting some eerily realistic animations of famous poets reciting their works. The one above is particularly striking. 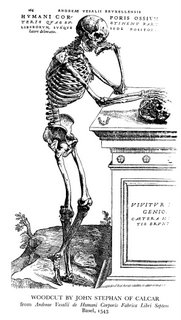 Old Adam, the carrion crow,
The old crow of Cairo;
He sat in the shower, and let it flow
Under his tail and over his crest;
And through every feather
Leaked the wet weather;
And the bough swung under his nest;
For his beak it was heavy with marrow.
Is that the wind dying? O no;
It’s only two devils, that blow
Through a murderer’s bones, to and fro,
In the ghosts’ moonshine.

Ho! Eve, my grey carrion wife,
When we have supped on kings’ marrow,
Where shall we drink and make merry our life?
Our nest it is queen Cleopatra’s skull,
’Tis cloven and cracked,
And battered and hacked,
But with tears of blue eyes it is full:
Let us drink then, my raven of Cairo.
Is that the wind dying? O no;
It’s only two devils, that blow
Through a murderer’s bones, to and fro,
In the ghosts’ moonshine.

Work and school have been placing increasing demands on my time, and the other day, I realized that I’m running the risk of completely neglecting one of my favorite times of the year. Luckily, Richard Geyer’s newly re-launched, Thomas Lovell Beddoes site, The Phantom Wooer, reminded me that Halloween is just around the corner.

Though Beddoes (1803-1849), referred to as “the most morbid poet in the English language,” wrote during the late Romantic period, the bulk of his output consists of poetic, Elizabethan/Jacobean style dramas in the manner of Webster and Tourneur. Consistent with such a style, these plays are sprinkled with many brilliant lyrics, such as the macabre poem above, which appears in Beddoes’ masterpiece, Death’s Jest Book (available at Geyer’s site). Though his lyrics are often anthologized apart from their respective plays, Ezra Pound (who refers to Beddoes as “prince of morticians” in Canto XXX) rightly warns in his essay, Beddoes and Chronology, that they are even more impressive when seen in context, and though it’s harder to anthologize, much of Beddoes best writing appears in his dramatic blank verse.

Though Beddoes is still a rather obscure poet, there is a society dedicated to him, which publishes an annual scholarly journal and is overseen by the poet’s distant relative John Lovell Beddoes.

Another bonus that came along with this trip was my visit to the Warhol Museum last night. Amazing! To be able to see an artist’s entire career by looking at all of his original work was a stunning experience. Of course, I also enjoyed the exhibits dealing with the cultural atmosphere of New York during his residence, particularly the concert fliers for bands like Television, Suicide, the Contortions, Richard Hell and the Voidoids, and Patti Smith. The museum was definitely the high point of the trip, so far.