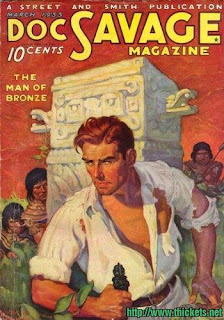 Today marks the 75th anniversary of the birth of Doc Savage, one of the most popular characters in the history of pulp fiction. Capitalizing on their success with The Shadow, Street and Smith publishers decided to create a new character who was more of a superhero adventurer than detective (though Doc could have easily matched wits with The Shadow, himself). The first adventure was published just two years after the Shadow’s debut in 1931, and like The Shadow, was written under a pseudonymous by-line, “Kenneth Robeson”. Lester Dent was Doc Savage’s actual creator and wrote the majority of the stories.

In his debut, titled “The Man of Bronze”, Doc and his “Fabulous 5” companions, shortly after the funeral of Doc’s father, Clark Savage, Sr., find themselves under attack by a warrior from a lost South American civilization. After this has been thwarted, the team goes on the offensive and flies to the “lost valley” in South America, where they become entangled in a civil war and treasure hunt. It’s a classic, H. Rider Haggard-like, adventure yarn, modernized and paced for an audience who would, in another five years, be reading the exploits of Savage’s comic book descendant–Superman (N.B. Dov Savage was the owner of the first “Fortress of Solitude”).

The story has been reprinted many times over the years and is available in several formats, but if you want to really experience the look and feel of the original, please check out Anthony Tollin’s reprint (and the others he has done). Also, for bibliographic information, I highly recommend Chuck Welch’s Doc Savage Organized site.