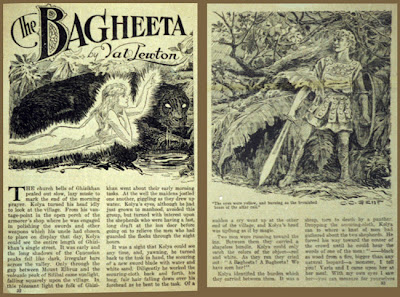 A couple of weeks ago, I came home from an eye exam and, since I was still dilated and couldn’t read, decided to watch a movie instead. I was actually lucky enough to catch The Ghost Ship on TCM, a Val Lewton flick from the forties, which was once thought “lost”. Though the horrific aspects of the film were solely psychological and based on the derangement of an aging sea captain, it was still pure Lewton (there’s even a scene where the captain begins hearing voices before going on a homicidal rampage). I naturally wanted to re-watch some more of his films, but so far, I’ve only had time for Cat People (I Walked with a Zombie still remains cued up on the VCR). As I sat watching Cat People for the umpteenth time, it seemed so atmospherically and thematically similar to the Weird Tales magazines of the late thirties and early forties and reminded me that I had seen Lewton’s name in one my Weird Tales anthologies. I rummaged about my shelves and, sure enough, there’s a story of his called “The Bagheeta” in Marvin Kaye’s Weird Tales: The Magazine That Never Dies (Garden City, N.Y. : Doubleday Book & Music Clubs, 1988). The story appeared in the July 1930 issue and is a lovely folktale about a young man hunting a panther that has the ability to turn into a woman, seducing and killing her hunters. For those who have seen Cat People or The Curse of the Cat People this should sound somewhat familiar, but please, feel free to judge for yourself. The Val Lewton Screenplay Collection contains both the screenplay of Cat People and the “The Bagheeta”, as well as the screenplays of all the other Lewton films. It even has the American Weekly article that inspired I Walked with a Zombie. Strangely enough, though Lewton wrote several novels and a good deal of journalism, “The Bagheeta” is the only short story of his that I have been able to find so far.

« "Who Knows What Evil Lurks in the Hearts of Men?" » Dracula Has Risen from the Grave